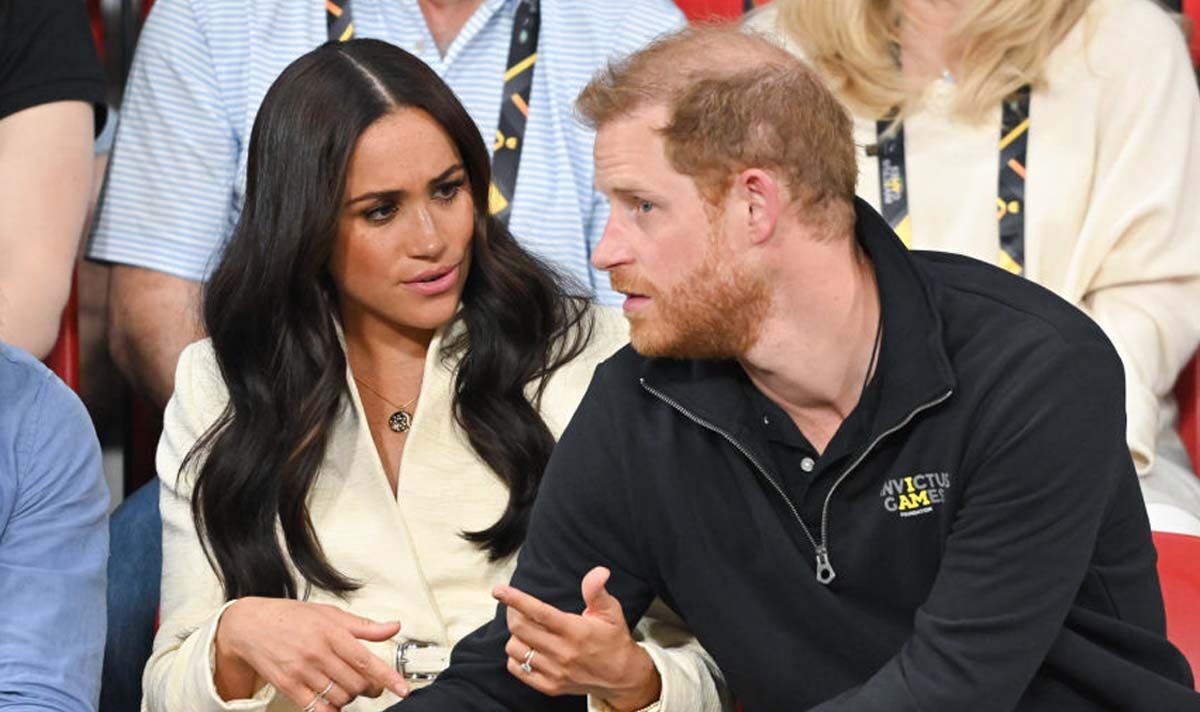 Royals: Expert thinks Meghan and Harry could appear on balcony

Prince Harry and his wife, Meghan Markle, are expected to stay in Frogmore Cottage during their stay in the UK next month. When the Duke and Duchess of Sussex relocated to the US following their exit from the Firm, they let Princess Eugenie and her husband, Jack Brooksbank, move into the Windsor residence. Harry and Meghan will be traveling from their home in California to attend celebrations for the monarch’s historic 70-year reign.

A spokesperson for Meghan, 40, and Harry, 37, said they were “excited and honored” to return to the UK.

The couple will be joined by their children Archie, three, and Lilibet, who will celebrate her first birthday on June 4.

The trip will mark the first time the 96-year-old monarch has met Meghan and Harry’s daughter, Lilibet ‘Lili’ Diana.

Harry has previously said that he “does not feel safe” bringing his two young children to the UK.

Meghan and Harry are returning to the UK for the Jubilee celebrations. (Image: Max Mumby/Indigo/Getty Images)

The Duke is currently in a legal battle with the Home Office over police protection for him and his family while in the country.

According to a report in The Sun, “heightened security measures” are already being implemented ahead of their arrival.

The issue of security has been widely reported since January when the news emerged that the Sussexes felt they were “unable” to return to the UK unless they had police protection.

But one royal expert believes the “security line” may be an attempt on behalf of the Sussexes to increase their “celebrity currency”.

Harry is currently embroiled in a legal battle with the Home Office. (Image: Samir Hussein/WireImage)

He said: “I think the security line is something of a — well it has two purposes — one to serve as an excuse really for not really wanting to be somewhere or thinking it doesn’t fit into their image, and I think the other side is a prestige thing and a way of trying to increase one’s celebrity currency.

“If you’re so important that you need privately-paid for protection from the police of the country you’re going to, then I think you get to say you’re a very important person.”

He added: “So I think security has kind of become this shorthand for how valuable a celebrity you are in terms of entertainment value and kudos on the world stage.”

Following their meeting with the Queen last month, it was reported that Meghan and Harry had been invited to join the Royal Family on the Buckingham Palace balcony during the Platinum Jubilee celebrations.

The family gathers on the balcony to watch the flypast during Trooping the Colour. (Image: Getty Images)

However, it has since been confirmed that the couple will not be among the royals joining the monarch for the iconic scene.

In a statement released on Friday, the Palace said: “After careful consideration, The Queen has decided this year’s traditional Trooping the Color balcony appearance on Thursday 2 June will be limited to Her Majesty and those Members of the Royal Family who are currently undertaking official public duties on behalf of The Queen.”

The Queen’s decision means that will be joined by Prince Charles and Camilla, Duchess of Cornwall, Prince William and Kate, Duchess of Cambridge, Prince Edward and Sophie, Countess of Wessex, Princess Anne, the Duke and Duchess of Gloucester, the Duke of Kent and Princess Alexandra.

In addition, the Cambridge and Wessex children are expected to appear, as is Sir Tim Laurence, the husband of Princess Anne.

Meghan and Harry have been invited to attend other Jubilee events. (Image: Karwai Tang/WireImage)

They have been invited to attend other Jubilee events during the weekend, including the Service of Thanksgiving at St Paul’s Cathedral.

They will attend as guests and in a non-formal capacity.

Due to her ongoing health and mobility issues, it remains unknown what events the Queen will attend throughout the four-day celebrations.

The Queen has been suffering from health and mobility issues. (Image: RICHARD POHLE/POOL/AFP via Getty Images)

On Tuesday, the monarch missed the State Opening of Parliament for the first time in nearly 60 years.

She was forced to pull out of the key state event due to “episodic mobility problems”.

Nonetheless, Her Majesty remains hopeful that she will be able to attend some events during the Jubilee, but her attendance will not be confirmed until the day in question.

Her appearances are expected to be limited to the Trooping the Color — the iconic balcony appearance during the parade and flypast that kicks off the celebrations — and a service of celebration at St Paul’s Cathedral the next day.